Germaine Richier was born in Grans, in southwest France. She began her artistic studies in 1920, when she was admitted to the École des Beaux-Arts of Montpellier. She studied there until 1926 under the tutelage of Louis-Jacques Guigues (1867-1943), one of Rodin's former assistants. At the end of her studies, she moved to the French capital, working in Antoine Bourdelle's studio until he died. On December 12, 1929, she married the Swiss sculptor Otto Bänninger (1897-1973), whom she'd met in Bourdelle's studio, where he worked as an assistant. In 1934, the gallery Max Kaganovitch gave her her first solo show in Paris. Two years later, she won the Blumenthal Prize (The Blumenthal Prize was an award given by the Florence Blumenthal Franco-American Foundation between 1919 and 1950 to support painters, sculptors, writers, designers, and musicians) for her extremely modernist Bust #2. In 1929, referring to that work, Charles Despiau told her "Maine, you don't often do a bust like that." In 1937 Georges Huisman, the director general of the Beaux-Arts, chose Germaine Richier to represent the Languedoc pavilion at the Universal Exposition. She received the Medal of Honor for her work Mediterranean. She also participated in the International Exhibition in New York in 1939.
The outbreak of the Second World War marked a turning point in her work. As refugee in Switzerland, alongside Alberto Giacometti (1901-1966), Jean Arp (1886-1966), and Marino Marini (1901-1980), she enjoyed considerable success, and a number of collectors acquired her works. She created Le Crapaud (The Toad) in 1940, a sculpture that declared a new aesthetic that blended human, animal, and vegetal worlds. Between 1945 and 1946, she showed work at the Kunstmuseum (Basel), the Kunsthaus (Zurich), and the Kunsthalle (Bern). Her interest in the animal world culminated in a series of "women-insects," including La Sauterelle (The Grasshopper) in 1944 and La Mante (The Mantis) and L'Araignée (The Spider), in 1946. She returned to Paris after the war and went back to teaching, which she'd begun in the early 1930s. In 1947, she had a show at the Anglo French Art Center in London, where she made an important connection with Roger Lacourière (1892-1966), who introduced her to the art of engraving. She also got to know Picasso through the Salon de Mai, where she showed work every year from then on. Picasso once remarked to her, "We're of the same family."(in. Germaine Richier, Retrospective, Fondation Maeght, Saint-Paul, April 5-June 25, 1996, p.74). She worked with Libero Nardone, one of Rodin's former models, who posed for L'Orage (The Storm), which was presented at the Venice Biennial in 1950. Germaine Richier augmented her sculptures with various materials, such as the iron wire in Le Diabolo (1950), Don Quichotte (1950-51), and Le Griffu (1952). Her "hybrid figures," deformed, scarred, or pierced, speak to the wounds of the war and to the carnal connection between Man and Nature. In 1956, the director of the Musée National d'Art moderne, Jean Cassou (1897-1986), organized a retrospective of her work : it is the first one dedicated to a woman during her lifetime. At the beginning of 1957, her health began to deteriorate seriously, and she died on July 31, 1959, after a long illness. That same year, she had a show at the Museum of Modern Art in New York
Works by Germaine Richier are held in many public collections, particularly in France, including the Musée National d'Art Moderne and at the Centre National des Arts Plastiques, and in the United States, in the Detroit Institute of Arts, The Art Institute of Chicago, the Museum of Modern Art in New York, The Baltimore Museum of Art, and the Phoenix Art Museum. 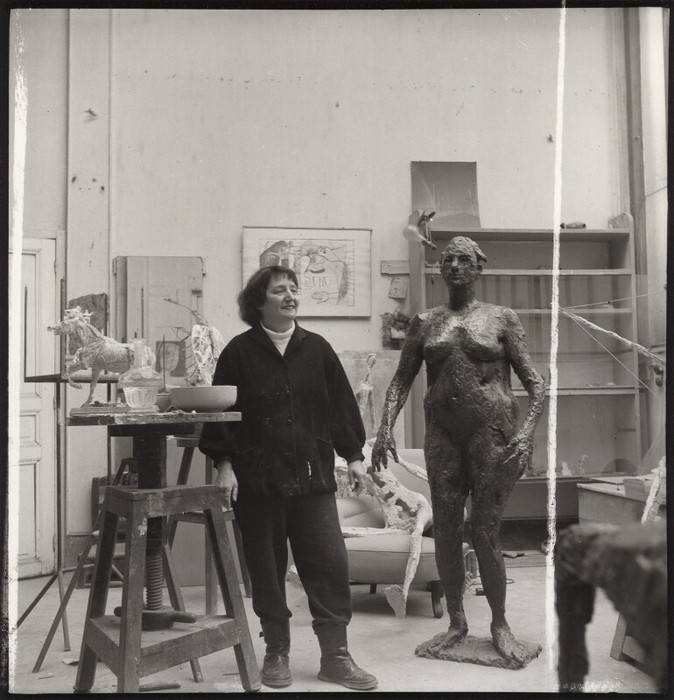 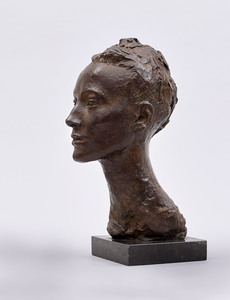 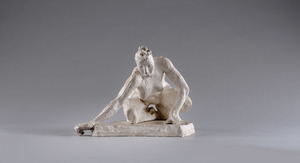