Jean Osouf was born in Vitry le François in 1898. He was expected to carry on his father’s wine business, but World War II ruined the family. Osouf nevertheless managed set up his own business in fabric and became very wealthy. He then sold his business in order to buy a bookshop near the Sorbonne: he wished to perfect his knowledge by reading. At this time, he began making small clay figures. On a Danish client’s advice, he entered the Académie Scandinave where Despiau was his teacher. Then, thanks to his first wife who was Spanish, he was introduced to Aristide Maillol in Banyuls. In an interview, Jean Osouf said that his two masters “reacted against the tumult and torment of Rodin, and they came back to a serenity and a calm that conquered me immediately”.
At the age of thirty, he quit everything for sculpture. After he had discovered the Chartres cathedral, his work was deeply influenced by the medieval tradition. He created draped figures, and pure faces such as the busts of Coralie, Jean-Claude, Catalane, Tounette, Mlle Antoinette Bréard, Le Jeune Maquisard, La Jeune Catalane. About these busts, Waldemar George said: “Osouf knows how to find in his busts the smile of the Angel of Reims, this Da Vinci smile that did not exist yet, and that epitomizes the French heritage”.
And Robert Couturier added: “Some of these busts, and some nudes too, are of such quality that they are outstanding in our time… This art is out of time, and there lies its power and beauty”.
In 1934, his first exhibitions took place at the Salon des Tuileries and at the Georges Petit Gallery. His work was displayed along with works of Maillol, Manolo, Cornet, Malfray, Gargallo, Couturier and Laurens. Two years later, he was part of the French Art Exhibition in Den Haag. His monumental work, L’Eveil, was erected in front of the National Museum of Modern Art in 1937. In 1940, he became Professor at the Ranson Academy replacing Maillol and Malfray and he was a member of several juries at the Ecole des Beaux –Arts. His work was exhibited all over the world in big cities: Oslo, Copenhagen, Stockholm, Den Haag, Cairo, Amsterdam, Brussels, New York and Madrid.
In 1955, he had an important exhibition at the Bernier Gallery and in 1963, he founded the “Groupe des Neuf” with others sculptors. Then, he participated in the “Exhibition of the Nine” (Vendôme Gallery, 1964), “Twenty two sculptors give their testimony on mankind” (Saint-Denis museum, 1966), First Festival of Contemporary Sculpture and Sculpture in a park (Saint-Ouen, 1967), Sculptors at the Center (Centre d’Etudes Nucléaires de Saclay, 1967). In 1966, a retrospective exhibition of his work was presented in the Saint-Ouen castle. He received several prizes, including the Louis Paul Weiller prize in 1974.
He died on the 19th of March 1996. In 1998, twenty-six of his works were donated to the Museum of Fine Arts in Reims.
... 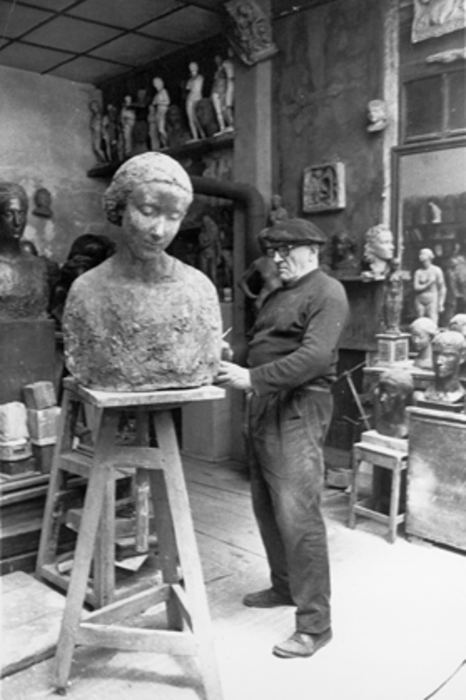