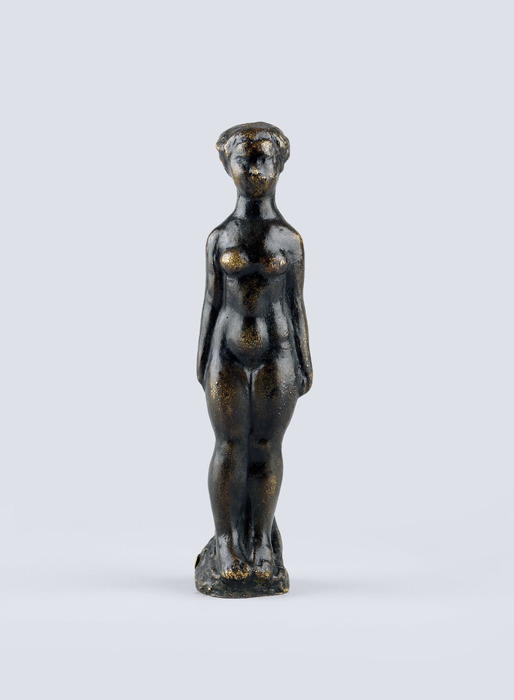 The Context of Creation

The beginning of the 1930s was a difficult period in Charles Malfray's career. Scandals provoked by his memorial monuments in Pithiviers (1920) and Orléans (1922-29) had plunged the misunderstood artist into deep emotional distress, which was accentuated by the untimely death of his brother Henri at the beginning of 1932. Furthermore, his Buste de la Beauce was not chosen in the competition held by the state in June of 1932 for the figure of the Republic.

Despite these obstacles, the sculptor continued to develop his personal style. The following year, working with his typical perseverance, he embarked on a less tumultuous phase of his production, creating works that were received with the welcome they deserved. From 1933 to 1940, Malfray was in the full flower of his artistic abilities, and was rewarded with public commissions from 1936 on, thanks to the support of Jean Zay, the national minister of education. All that stopped with the artist's sudden death in 1940.

From 1930 on, Aristide Maillol (1861-1944), who was a friend and defender of the artist from Orléans, asked Malfray to take over his modeling course at the Académie Ranson. Malfray loved the work, and his students appreciated the quality of his teaching. That same year, the Galerie Pacquereau (Paris) organized his first solo exhibition.

It was a period in which Malfray was also working on a number of decorative projects, such as entablatures for mantlepieces, and even enamels, thus works that were of relatively small dimensions. This was the context in which The African, formerly known as The Small Negress, was created.

The small statuette represents a naked young girl. She stands on a small mound, her feet forward on the slope, and her toes in the air. And yet the girl holds herself perfectly straight, and her balance seems not the least disturbed by this position. The features are only very lightly indicated, and the gaze of her eyes seems set on the far distance. Her lovely rounded thighs, the curve of her breast and buttocks, and her tight, curly hair all suggest that she's a young African. With her arms down along her sides and her muscles taut, she has the air of a columnar stature or a caryatide.
Malfray showed a marked affinity for architectural art, and, in fact, collaborated with his older brother, who was an architect, on the development of the Monument aux morts d'Orléans (Monument to the Dead of Orléans). The African is related to the figures that form the corners of the base of that monument through the rigorous geometry of the posture. It also looks forward to the concepts and principles that contributed to the development of Printemps (Spring), a commission from the State for a piece to decorate the entry room of the Palais du Trocadéro. In creating that work, Malfray, "altered the figure's form to make it fit logically into its position in the overall space."[1] And, in fact, the figure, still in place today, wasn't truly complete until it was situated within the four columns of the entry.

Like Spring and other works by the sculptor, The African strikes a rigid, aloof pose. And yet Malfray has managed to catch a precise movement, almost imperceptible, in this work. From the back, a drapery covering the tops of the model's legs can be seen. Barely still held by her hands, she seems about to let it go, in a final gesture of undressing. Malfray's interest in contrasting motion and immobility goes back to the 1920s, when he met, and did drawings of, the dancer Isadora Duncan (1877-1927). "Malfray was paradoxically attracted to the static quality, which is to say, the monumental quality, of Duncan's movements. It was a time in Malfray's work when he was immobilizing his forms, blocking out his volumes, and conveying Life's tensions as an underlying force, ready to explode."[2]
In 1933, the sculptor continued his experiments with capturing motion with the Deux Nageuses (The Two Swimmers), a work that he did at the same time as The African. Malfray "created a new iconographic type with the group Deux Nageuses, in which the forms are based on and around a central void. But at the same time, he was also trying to immobilize the body,"[3] exactly as he had done with the small African.

A Return to Antiquity

The immobility of this small statuette, its vertical pose, its reductive features, and the triangular shape of the face as well as the line of the toes, like a circumflex, suggest a tiny idol that is levitating, infused with an internal energy that's radiating outward. These features can also be found in Cycladic art of the 3rd and 2nd millennia BCE. This ancient Greek civilization flowered in the archipelago around Delos and produced small marble idols in refined geometric forms. Their exact function remains a mystery, although they seem to have had a funerary and votive purpose.

This funerary and votive role was also a feature of Tanagra figurines, "small terra cotta figures made in the Tanagra region of Greece in the 4th and 3rd centuries BCE, usually representing young women with fine lines and a gracious bearing,"[4] with which the present work is often associated. The grace of The African can be compared to that of the Tanagra figurines[5] even though their morphologies are different and the Greek civilization represented them clothed. The Danish critic Haavard Rostrup described The African in an article in February 1938 as "a ravishing work of utter beauty, naïve in its composition, like a Greek terra cotta, but composed of small, intentional shifts within the planes and slight movements that give the small figure the sense of a mysterious life; a dancing rhythm emanates from the rounded pose, from the feet to the head, which seems to be listening …"[6]
The African is the epitome of a small idol, a talismanic sculpture charged with magical and telluric forces. As he often did, Malfray created a sculpture small in dimension (less than twenty centimeters), in a format identical to that of many Tanagra figures and Cycladic idols. It was later enlarged in two formats, one 55 cm and the other 110 cm.