Joseph Bernard was born in 1866 into a family of craftsmen. His father, who was a stone carver, taught him his craft, and he was naturally gifted at drawing. He began formal studies at the École des Beaux-Arts in Lyon, concentrating on anatomy, modeling, and drawing. From 1886 to 1890, he was registered at the École des Beaux-Arts in Paris, but was not a notable student, perhaps because Jules Cavelier didn’t permit drawing during the sculpture classes.

Throughout the 1890s, his work showed the influence of Rodin, and though most of it was fairly modest—decorative objects, family portraits, etc.—he also began receiving his first commissions for large-scale works, such as Hope Defeated, The Burden of Life, and The Monument for Peace, though he didn’t always manage to finish them. In 1899, he moved to three studios in the Cité Falguière, where he stayed until 1921.

From 1903 on, he concentrated more and more on stone carving; at first, he made clay models before moving on to the stone, but gradually, in pieces such as Striving for Nature, Modern Sphinx, and The Festival of the Grape, he began working directly in stone without any initial terra cotta sketches. Monument for Michel Servet, commissioned in 1905 by the city of Viena, was also directly carved.

Bernard used two principal techniques in his work: clay modeling for editions done in bronze and direct carving in stone. From 1892 to 1900, he participated in the Salon des Artistes Français, and from 1910 to 1927, he regularly showed his work in the Salon d’Automne. He had his first solo exhibition in 1908 at the Hébrard Gallery, and in 1913, he exhibited both Young Woman with Jug (a plaster) and Tenderness (a marble) at the Armory Show in New York. After the war, various Parisian galleries gave him one-man shows, and he participated in all the Venice Biennales from 1922 to 1932.

During the war, Bernard suffered a stroke, which caused him to stop working for a while. After moving from the Cité Falguière to Boulogne, he slowly recovered and went back to stone carving, creating such pieces as Bust with Two Hands (1920) and Young Woman with Braids (1923). Around this time also, he decided to destroy some of his earlier works. The International Exhibition in 1925 revealed him as one of the most important scultptors of his generation. He died a few years later in 1931. 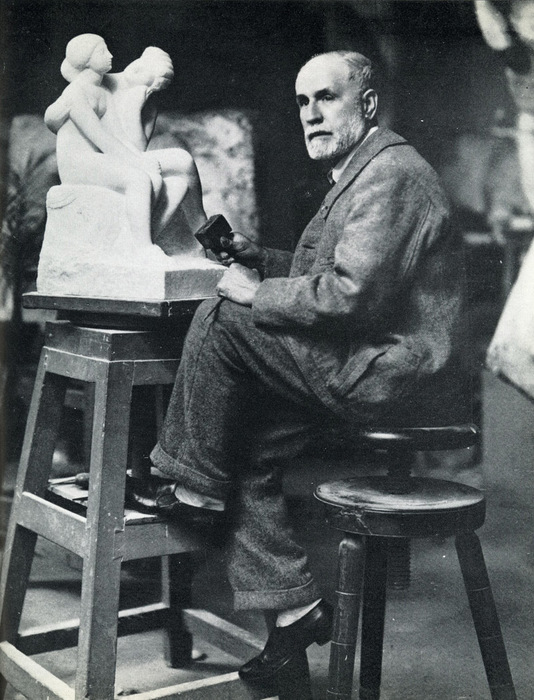